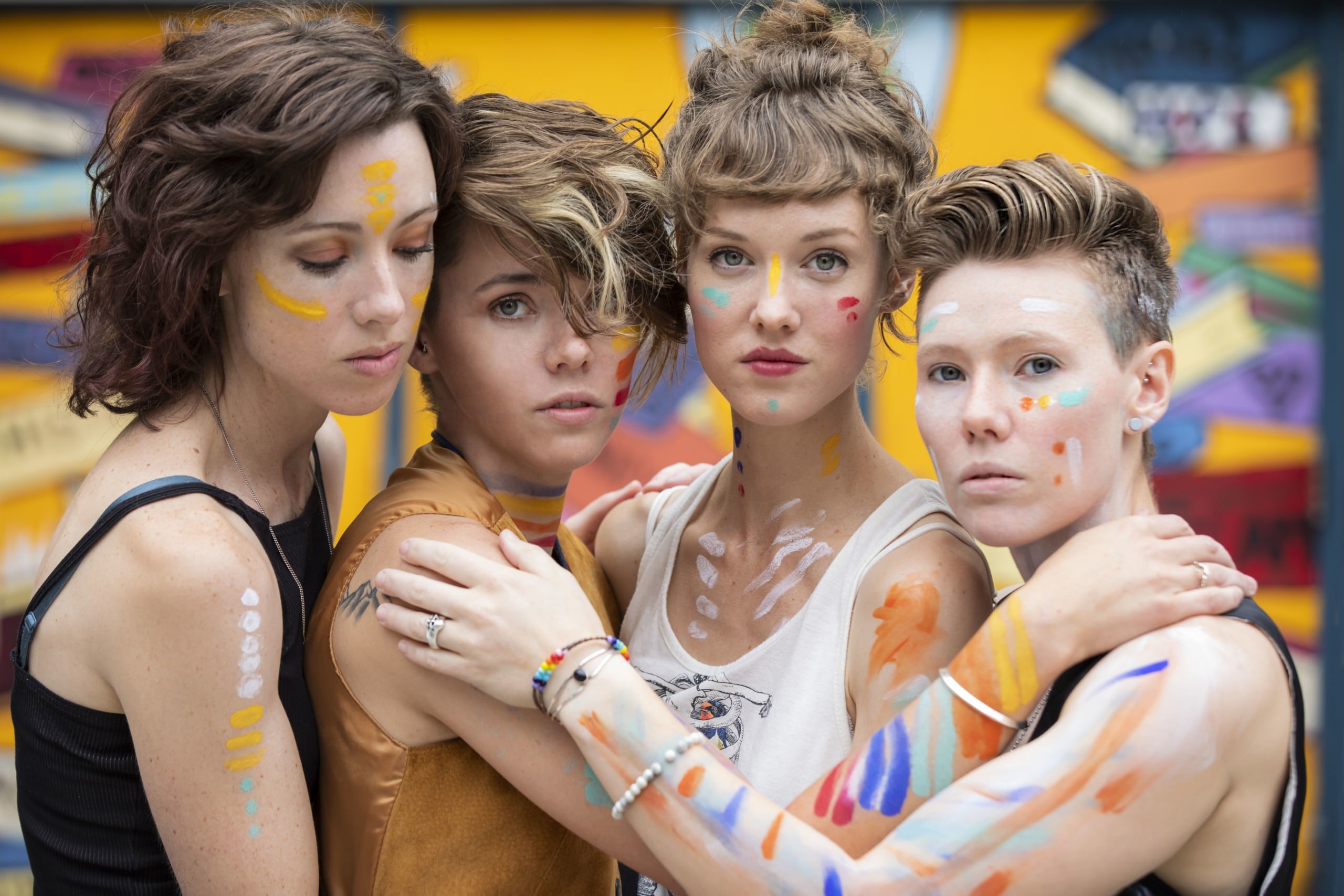 The billowing curtains of sound on Just Crazy Enough, the second full length album from virtuoso indie-folk band SHEL, will be both familiar and far-out to fans of the exciting sister quartet. The classically inspired mandolin, violin and piano are there, along with the band’s glowing vocal harmonies. But we also hear dense, ethereal textures that hover between the digital and the analog. Grooves are deeper, emboldened with electronic ambience and beat-boxing. The overall effect sheds light on their broad collection of influences, from the daring rock bands of the 60s to the contemplative composers of the 18th Century, and even the waves of modern electronica. Because or in spite of this effervescent mashup, Just Crazy Enough is a masterful move for SHEL. It’s the integral, front-to-back album statement the band has been preparing to make since they began making music.

Dynamic change and self-searching was inevitably going to be a big part of SHEL’s story in these early career years. Sisters Eva, Hannah, Sarah and Liza Holbrook are, after all, twenty-something women, born in a five-year span and raised in a bohemian, art-loving family in Fort Collins, CO. Each found an instrument to master early on, studying classical music while composing and arranging unique works for their anomalous instrumentation, violin, mandolin, piano and drums. They gained performing experience working with their songwriter father, and soon had festival promoters and media figures championing their fresh, intricately drawn sound.

SHEL is now touring and creating relentlessly in the hothouse environment of the 21st century music business. “We’ve always made our living playing music,’ says Sarah Holbrook, “I dropped out of two different colleges, before it finally sank in that I was supposed to be playing music with my sisters full time. We signed with Republic Records early on, but escaped the ‘artist protection program’ and we’re prouder than ever to be waving our indie banner.”

They are united in their musical vision, yet doggedly possessive and respectful of their evolving individual identities, including the growing pains and struggles of young adulthood. “I remember having a distinct realization that we’d finally grown up, followed by the terrifying thought that we had more questions than answers about life.” Says Eva Holbrook about writing the album. “Sharing these songs has shown us we’re not alone.”

SHEL music is many things sonically, but its coherence and distinctiveness comes from the sisters’ commitment to making every song an honest four-way collaboration. That said, every artist profits from outside perspective, and circumstances aligned in recent years to work with Eurythmics co-founder and world-renowned electronic music creator Dave Stewart, whose production credits include albums with Stevie Nicks, Joss Stone and Ringo Starr. SHEL arranged and recorded tracks in Nashville with long-time producer Brent Maher. Then Stewart, in his Los Angeles studio, sculpted sounds and beats to complement each track. The mandate was to uphold the soul of the songs, the acoustic musicality of the sisters as players, the subtlety of Eva’s lead vocals and the colors of the four-way harmonies.

The other priority for Just Crazy Enough was to capture the intensity of SHEL’s live performance. The answer lay in fully mining the sisters’ wide-ranging talents. Hannah Holbrook says, “We were all instrumentalists long before we learned to sing, and telling a story through melody and arrangement is the part of our work that we bond over most.”

Opener “Is The Doctor In Today” begins quiet with reflective lyrics, but swells with emotion and harmonies as a theme of searching is established. Liza’s drumming and percussion throughout the record is exciting and creative, from the irresistible groove in “You Could Be My Baby,” to her expert beat boxing on “Rooftop.” Hannah plays a hooky Moog synthesizer in “Let Me Do,” which glides around Eva’s voice with an organic inevitability. And after covering Zeppelin on their debut, SHEL risks sacrilege against the Rock Gods once again with their version of Metallica’s “Enter Sandman,” a 180 degree flip on the original, with whispered vocals and almost churchlike solemnity. Near the end of the album comes the unexpectedly vigorous and marching “Moonshine Hill,” featuring a shot of Sarah’s lively fiddle in a slice of pop music heaven. The album wraps with “Stronger Than My Fears,” which grows from intimate folk to unearthly beauty, evoking a heath on the Irish coast or the moon of a nearby planet.

The group’s passion for art of all kinds and irrepressible creativity has been central to their inventive music videos. All contribute to the engaging productions. “We’re living our art every day” says Eva Holbrook, “turning our rooms into staging studios, filming on rooftops in Amsterdam, moving pianos into a river. But Sarah is the key to all of it. Her ability as a director, videographer and editor conveys our collective vision.”

Conspicuous in those visuals is an evolved esthetic that transforms thrift store fashion finds into an Alice-In-Wonderland British romanticism. The title of a workshop they offer on the road, “I’m A Weirdo…Are You a Weirdo Too?” tells you some of what you need to know about their self-awareness in a world of mass consumerism. SHEL’s album art features the band with and without makeup — an expression of their views on individuality and natural beauty. “We love to wear makeup for fun,” says Liza Holbrook. “But we don’t believe that makeup or expensive clothing are the things that make a woman beautiful.”

In a new music scene that’s crowded, genre-twisting and attuned to mastery in live performance, SHEL is a must-know young band for anyone who wants to keep up with tomorrow’s greats. Their spellbinding live performances tap deep skills as instrumentalists and total trust to generate improbable power on stage. They share some contemporary musical DNA with Americana bands, Punch Brothers and Crooked Still, but just as surely with adventuresome artists such as tUnE-yArDs, St. Vincent and Alt-J. The future belongs to artists who go beyond mere genre blending by focusing on their inner music and the four powerful personalities of SHEL do just that.