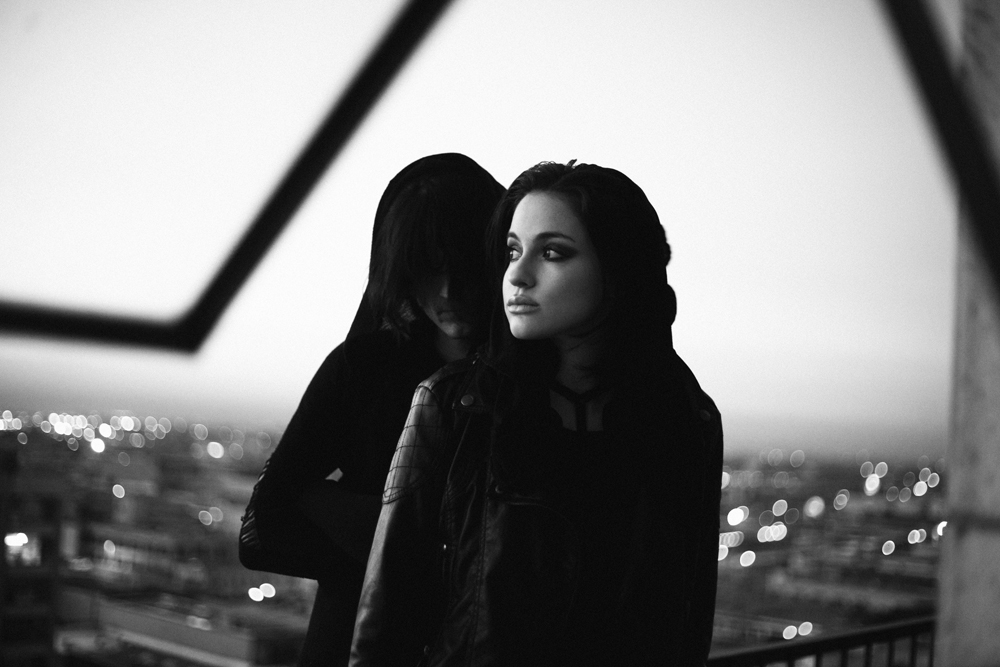 War torn from past and present battles of mental illness and addiction, the monsters are very real and the abyss is a current state of reality for MXMS, short for “Me and My Shadow.” Comprised of singer Ariel Levitan and multi-instrumentalist Jeremy Dawson, the self-produced duo from New York City and small town Oklahoma creates their own musical genre “Funeral Pop” fusing classic melodic songwriting with dark unfiltered chaos driven by a thousand forms of fear.

Previous singles from Me and My Shadow focused on the minimalism of a raw piano and voice; drawing from Jeremy’s classical piano background complimenting Ariel’s heart piercing tenor vocals. The new recordings reflect their sonic progression to an expansive pallet of dark instrumentation, pulsing analog synthesizers and a crushing rhythm section layered around Ariel’s
haunting delivery.Focusing on movements of emotional trauma and taboo metaphoric expression, the brutal honesty of MXMS leaves an open invitation for listeners’ own stories rise to the surface.

The duo’s cornerstone release “Gravedigger” is both a winter cry of sexual freedom and an macabre warning to future ill-intended suitors of Ariel. Moving gracefully through a flow of grinding synthesizers and drum machines, Ariel reveals her story that twists from danger to desire with a dash of resentment. Using visual audio and cinematic foley, producer and keyboardist Jeremy Dawson weaves samples of fire, car crashes and electrical storms with crushed beats and oscillating bass to push the lyric into a viewable interpretation. The result is a future forwarded peak hour low tempo banger with a dead-end result for the antagonist. The track sets fire to the minds of empowered females across the planet.

MXMS interprets their recordings live using sequences of projection, keyboards, guitars, and drums creating a safe space for Ariel to deliver her message for the hopeful and the hopeless alike. Their debut untitled album will be released on Brill Building/Kobalt Records in early 2019.

“MXMS’s music frequently swells from lush yet painfully intimate lows to rousing and inspirational cinematic highs, demanding to be mined for a transformative film montage.The duo relishes straddling the fine line between light and dark– as well as navigating, and often deliberately disrupting, the fault line between their fierce desires to both shun industry norms, and to share their music withthe world.” -Kurt McVey for Interview Magazine