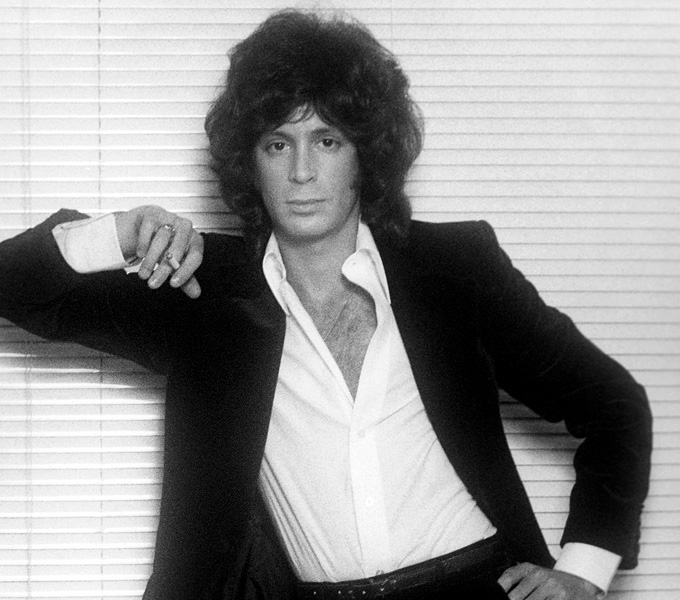 Eric Howard Carmen (born Aug. 11, 1949) is an American singer, songwriter, guitarist, and keyboardist. He scored numerous hit songs across the 1970s and 1980s, first as a member of the Raspberries (who had a million selling single with “Go All the Way”), and then with his solo career, including hits such as “All by Myself,” “Never Gonna Fall in Love Again,” “She Did It,” “Hungry Eyes,” and “Make Me Lose Control.”

From a family of Russian Jewish immigrants, Carmen was born in Cleveland, Ohio and grew up in Lyndhurst, Ohio. He has been involved with music since early childhood. By the age of two, he was entertaining his parents with impressions of Jimmy Durante and Johnnie Ray. By age three, he was in the Dalcroze Eurhythmics program at the Cleveland Institute of Music. At six years old, he took violin lessons from Muriel Carmen (his aunt), a violinist of the Cleveland Orchestra. By age 11, he was playing piano and dreaming about writing his own songs. The arrival of the Beatles and the Rolling Stones altered his dream slightly. By the time he was a sophomore at Charles F. Brush High School, Eric Carmen was playing piano and singing in rock ‘n’ roll bands including the Fugitives, the Harlequins, the Sounds of Silence and the Cyrus Erie.

Though classically trained in piano, Carmen became a self-taught guitarist. At 15, he started guitar lessons, but when his teacher’s approach did not fit with what he wanted, he decided to teach himself. He bought a Beatles chord book and studied guitar for the next four months.

Carmen became serious about being a musician while attending John Carroll University. He joined a band named Cyrus Erie, which recorded several unsuccessful singles for Epic records. Cyrus Erie guitarist Wally Bryson had been playing with friends Jim Bonfanti and Dave Smalley in one of Cleveland’s most popular bands, the Choir, which scored a minor national hit in 1967 with the single “It’s Cold Outside”.

When Cyrus Erie and the Choir collapsed at the end of the 1960s, Carmen, Bryson, Bonfanti and Smalley teamed up to form Raspberries, a rock and roll band who were among the chief exponents of the early seventies power pop style. Carmen was the lead singer of the group, and wrote or co-wrote all their hit songs. In 1975, after the breakup of Raspberries, he started his solo career, de-emphasizing harder rock elements in favor of soft rock and power ballads, which were already the hallmark of Carmen tracks on Raspberries albums.

In 2004, Carmen, along with original Raspberries members Jim Bonfanti, Wally Bryson, and Dave Smalley, re-formed the band for a series of sold-out live performances in cities across the United States. On that tour, the Raspberries recorded a live album of their hits at The House of Blues on Sunset Strip, in Hollywood. Both the show and album received critical acclaim. Carmen himself has stated that he planned to write new harder-edged songs for the band to perform in the same vein as those that the Raspberries performed in the 1970s.

His first two solo singles were chart hits in 1976. Both were built around themes by Sergei Rachmaninoff. The first of these singles, “All By Myself” – based on Rachmaninoff’s Piano Concerto No. 2 – hit number 2 in the United States, and number 12 in the United Kingdom where it was his only charting hit. It sold over one million copies, and was awarded a gold disc by the R.I.A.A. in April 1976. The follow-up single, “Never Gonna Fall in Love Again” – based on the main theme of the slow movement of Rachmaninoff’s Symphony No. 2 – reached number 11 on the Billboard Hot 100, and hit number one on the US Adult Contemporary Chart, as well as number nine on the Cash Box chart. Two years after its 1975 release, this self-titled album was certified Gold in 1977 for sales of more than 500,000 copies. “That’s Rock and Roll” was also a number 3 hit single for singer Shaun Cassidy.

Carmen’s second album, Boats Against the Current, came out in the summer of 1977 and received strong reviews. It featured backup players such as Burton Cummings, Andrew Gold, Bruce Johnston and Nigel Olsson. The album spent 13 weeks in the Billboard Album chart, peaking number 45. It also produced the Top 20 single “She Did It,” but the title track only managed to scrape the bottom of the chart. The title track was later covered by Olivia Newton-John on her album Totally Hot. A third single taken from the album, “Marathon Man,” became his first solo single not to hit the Billboard Hot 100 chart. However, Shaun Cassidy again made the Top 10 in 1978 with Carmen’s “Hey Deanie.” For several weeks in the fall of 1977, Carmen had three compositions charting concurrently on the Billboard Hot 100, Cassidy’s two big hits and Carmen’s own “She Did It.”

Carmen followed up with two more albums. Despite declining chart fortunes, the single “Change of Heart” broke into the Pop Top 20 and reached number 6 at AC in late 1978, with this hit also being covered by Samantha Sang on her Emotion LP. But in 1980, after the release of the album “Tonight You’re Mine” and single “It Hurts Too Much” (number 75 Billboard Top 100; number 3 South Africa, June 1980) he temporarily withdrew from the music industry. Four years later, after Mike Reno and Ann Wilson topped the charts (Pop number 7; Adult Contemporary number one) with the Carmen-penned ballad “Almost Paradise” (the love theme to the film Footloose), Eric resurfaced on Geffen Records in 1985 with a second self-titled album and a sizeable comeback hit “I Wanna Hear It from Your Lips”. The single hit the Adult Contemporary Top 10 as well as the Pop Top 40. The follow-up single, “I’m Through with Love,” also climbed the Billboard Hot 100 and reached the Top 20 of the Adult Contemporary chart. Another track from the album, “Maybe My Baby,” later became a Country hit for Louise Mandrell. “I Wanna Hear It from Your Lips” was also a Country hit for Louise Mandrell.

In 1987, Carmen’s contribution to the hit movie Dirty Dancing, “Hungry Eyes”, hit number 2 on the Adult Contemporary Chart and also returned him to the Pop Top 10. “Reason To Try”, a further contribution to the One Moment in Time compilation album of songs recorded for the Seoul Summer Olympics, kept Carmen’s profile high in 1988, during which the nostalgic “Make Me Lose Control” also returned him to the number one position on the Adult Contemporary chart – where it stayed for three straight weeks – as well as number 3 on Billboard’s Hot 100. This became his highest charting song since “All By Myself”. Both, along with “Hungry Eyes”, having in the past two decades become classic pop radio favorites. Although Carmen did not follow his two hit singles with a new studio album in 1988, “Make Me Lose Control” was included on a revised ‘Best Of’ collection from Arista. (The original version of the album was released a few months before the single was released, and early pressings exclude the song.)

The year 2000 saw the stateside release of I Was Born to Love You, which had been released in 1998 only in Japan as Winter Dreams. Carmen eschewed the use of a band on the recording, playing most of the instruments and programming the drum parts himself. The album did not find a large audience, but Carmen has continued to enjoy success placing songs with other artists over the years. In 2000 he also toured for the first time in years with Ringo Starr and His All Starr Band performing “Hungry Eyes”, “Go All The Way” and “All By Myself”.