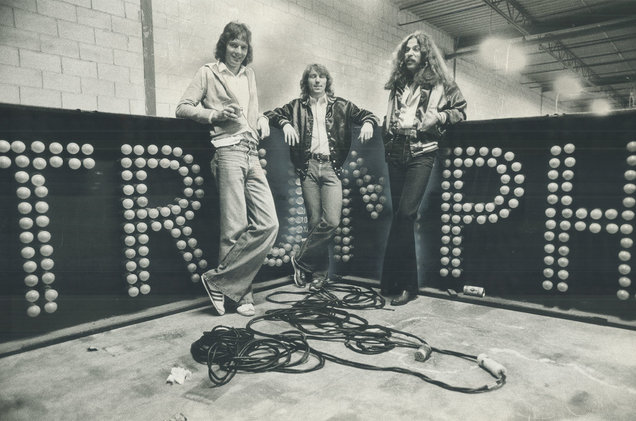 The Canadian band, which reissues its “Classics” album today, is capping a year of accolades.

In their heyday, Triumph truly amped up the term “power trio.” Guitarist-vocalist Rik Emmett, bassist-keyboardist-harmonizing vocalist Mike Levine and drummer-vocalist Gil Moore combined their musical passions and grand ambitions into a powerhouse rock’n’roll machine that, between 1975 and 1993, scored four Gold-certified albums and one Platinum-certified album in America, and multiple album certifications and Juno Award nominations in their Canadian homeland.

They redefined rock stage shows and band business practices. And they did it on their own terms.

The 2008 Canadian Music Hall of Fame inductees’ hard rock songs, which offered progressive and neoclassical underpinnings, are being celebrated with the 30th-anniversary reissue of the gold-selling Classics (Round Hill/Triumph Catalog), which arrives today on gatefold vinyl with two new live songs. The tracklist includes anthemic hits like “Lay It on the Line,” “Follow Your Heart,” “Fight the Good Fight” and “Magic Power.” The original release was to fulfill a contractual obligation following Emmett’s 1988 departure, but the members were unhappy with the low-budget packaging. Thus, the reissue features vintage photographs and lyrics on the album’s sleeves.

“We still have a very solid brand,” says Levine on the phone to Billboard from Canada. “So if you don’t do things first-class, don’t do it at all. I had to resequence everything to keep it around 18 minutes a side, which is where you get the optimum audio quality off a piece of vinyl.”

The Classics reissue tops off a busy year for a trio that hasn’t played live since 2008 or released a new album since 1992. The band received the Legends of Live honor in May at the Live Music Industry Awards during Canadian Music Week. It also was inducted into Canada’s Walk of Fame on Nov. 23, where it received a key to its hometown city of Mississauga, Ontario. “It was a lot of fun,” says the jovial bassist. “The three of us gave very eloquent and touching speeches for the three minutes we got to talk.” The evening featured a three-song Triumph tribute by a live band assembled by fellow Styx singer Lawrence Gowan and a video tribute by actor Kiefer Sutherland, both of whom are fellow Canadians.

“The fans thought maybe we would do something acoustic,” says Levine. “We put on the big show in a warehouse that was tricked out beautifully. When the curtain dropped and we were playing, the chairs went flying and they rushed the stage. It was very emotional, actually.” This was done for the forthcoming documentary, and the filmmakers also dressed up part of the Metalworks Studios complex with a memorabilia room. “They went through all our archives and picked all this stuff from clothing to stuff I had forgotten about or never even knew about. The fans loved every minute of it.”

Triumph formed after a 1975 jam session with Emmett, Moore and Levine. They officially started their recording career with a 1976 self-titled album on Attic in Canada, signed with RCA in the United States for 1977’s Rock & Roll Machine and released nine total records with their classic lineup. While the trio got lumped in with the exploding hard-rock and heavy metal scene of the early 1980s, including an appearance at the legendary 1983 US Festival, it was the quasi-“white knights” of that genre with its more positive lyrics and straighter-edged lifestyle.

In the first year of MTV (which began airing on Aug. 1, 1981), Triumph and Canadian brethren like Rush and April Wine dominated airplay on the fledgling music video station, not just because of their sound but because so few bands had a lot of videoclips. Triumph actually started making its own commercials around 1977 to boost its profile.

“We used to give it to promoters when we first started to tour in small markets,” says Levine. “They would run it on the news alternative stations between six and seven o’clock or whatever. And people would come because there’s pyro and there’s the Bill Young-type voice, the heavy voice, and it ran for a minute and looked like a huge concert. It worked.”

The group also was innovative in recording at its own studio, Metalworks Studios, which Moore still owns and runs 41 years later. (Musical heavyweights who have recorded there include Prince, Christina Aguilera, David Bowie and Drake.) As Levine recalls, it started as a place to do demos, but soon transformed into a full-blown studio where, starting with 1979’s Just a Game, Triumph recorded most of its albums.

Triumph also took a unique approach to touring. In the beginning, it bought its own sound and lighting rigs, and asked promoters to only pay for the band’s crew. Promoters thought the act was crazy to ask to be paid only if it made a profit. The band lost money at most gigs — but it got to play. Moore took over the managerial reins as well as designing the stage, bringing in an intense light show and, later, helping develop a more sophisticated laser production in the mid-1980s.

From the start, Triumph had big dreams and exuded confidence in its abilities. “We wouldn’t take no for an answer from anybody about anything,” says Levine. “So if somebody left a door open just a little bit, we would drive four semis through and blow it open. We figured we got one shot at this, and we’re not just going to sit around and play little clubs in Toronto because that’s the cool thing to do.”

They always aspired to get bigger and better, from virtuoso six-string playing to an agile rhythm section to Emmett’s and Moore’s distinct lead vocal styles. “We didn’t know if something would work or not work, but RCA Records opened up the purse and pretty much gave us a blank check to go on the road,” reveals Levine. But after five albums with RCA, the relationship soured as the label’s financial support waned, so MCA acquired Triumph and its catalog in 1984.

During the first half of the 1980s, Triumph became a major recording and touring act, churning out the aforementioned hits along with others like “Spellbound” and “I Live for the Weekend.” After 1984’s Thunder Seven, it took a more commercial direction, which resulted in the synthier The Sport of Kings (1986) and Surveillance(1987). This led to a creative rift between Emmett, who wanted to bring in other musical influences, and Moore and Levine. The band had let MCA influence the more commercial direction of those latter two albums, which strayed from its signature style, and they later regretted it. In 1988, Emmett left under what have been described as very bad circumstances involving music and business disputes. He pursued a solo career that has produced 10 studio releases, and Triumph continued on with future Bon Jovi guitarist Phil X for one more album, 1992’s Edge of Excess, before calling it a day the following year.

It took many years for the wounds of their musical divorce to heal before Triumph reunited to play Sweden Rock Festival and Rocklahoma in 2008. The shows went over well, leading Live Nation to start routing a North American tour, but the arrival of the Great Recession that year killed those plans. “A lot of our marquee markets were really crushed, whether it be Detroit or St. Louis or Dayton,” says Levine. By the time the economy had recovered a few years later, the momentum had been lost. Emmett recently retired from touring.

In the years since their split, Moore has expanded Metalworks (including the Metalworks Institute of Sound and Music Production), and Levine took charge of the Triumph catalog when the band regained its rights from MCA. That kept him busy up until a few years ago, when Round Hill Music bought the catalog. Levine calls Triumph royalties the gift that gives on giving. He’s unsure what the group’s total career sales are, but estimates them at 12 million and 15 million albums worldwide.

“We had the opportunity to touch people with our music,” says Levine. “I think that will be the biggest part of our legacy — that the music did the talking and people listened.”